In his first appearance, Aboras was one of two monsters (along with his counterpart, Banila) who had existed 300 million years ago during the Glacier Period. The monsters were described as being very violent and their destructive capacities would have destroyed mankind if left unchecked, thus the much more advanced civilization of that period managed to reduce both monsters into a liquid form and had them sealed away in a time capsule, never to be released again. However in present day Japan, the capsules were unearthed and Aboras's blue capsule was all that was found by the Science Patrol, who had it taken away to be studied by anthropologist Dr. Fukuyama and his colleagues. The experiments didn't accomplish much until suddenly when the capsule was hit by some electricity, the reaction reactivated the capsule's contents, reviving the monster and causing Aboras to go on a rampage, where he destroyed the research center he was in.

Aboras's path of destruction lead the monster to an olympic stadium, where he re-confronted Banila, and the two monster battled fiercely. Both monsters' fight seemed evenly matched with Aboas's foam countering Banila's flames, until finally the Science Patrol arrived to resume their attack. Despite hitting Aboras with their weapons, it didn't even so much as leave a scratch on the monster, and once Banila was mortally injured by the team, Aboras took advantage of the weakened monster and he sadistically murdered Banila with his foam bubbles, causing Banila to dissolve away by the attack. Aboras then turned its attention to the Science Patrol and attempted to kill them too. However, he was met with opposition by Ultraman! Even though Aboras hit Ultraman with a direct hit from his foam bubbles, Ultraman shook off the attack and took down Aboras without trouble. Finally after being struck by 3 consecutive Specium Rays fired by the ultra, Aboras was destroyed, ending the devil monsters' attack.

Aboras made a cameo appearance as one of the many Spark Dolls who transformed into Monsters after being exposed to the Ultra Flare event from Ultraman X's and Greeza's battle. Aboras was briefly seen battling against Banila in Moscow, Russia. 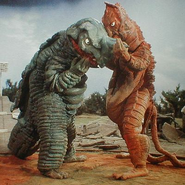 Banila vs. Aboras
Add a photo to this gallery

Retrieved from "https://ultraseries.fandom.com/wiki/Aboras?oldid=17882"
Community content is available under CC-BY-SA unless otherwise noted.