Cyber Gomora (サイバーゴモラ, - Saibā Gomora) is a Cyber Monster based on Data from Gomora that appeared throughout the series, Ultraman X. He first appeared in the 1st episode of the series, entitled "A Voice From the Starry Sky."[1] Subtitle: Cyber Monster (電脳怪獣, - Den'nō Kaijū)

Cyber Gomora was one of Xio's efforts to replicate the data of the Spark Dolls and convert them into Cards known as "Cyber Monsters." Cyber Gomora was also one of Xio's attempts to bring one of their Cyber Monsters into existence when Daichi's Spark Doll of Gomora was used to bring Cyber Gomora to life with the help of a Synchronization Testing Facility and a device known as the "X Deviser." However, the power output needed to bring Cyber Gomora into physical form gave up at 67% and thus the project failed. A Voice From the Starry Sky While the experiments on Cyber Gomora were over for the time being, Daichi however had other plans for his Monster, and during a battle against the Monster Birdon, Daichi used his Cyber Card of Gomora to adorn Ultraman X with Cybernetic "Mons Armor" stylized after that of Cyber Gomora. With the Gomora Mons Armor, Ultraman X was able to destroy Birdon with ease. A Collection of Possibilities Ultraman X would continue to use the Gomora Mons Armor against other adversaries such as Bandello and his Black King, When the Aegis Shines Quila's Zetton, X In Peril as well as the Dark Star Cluster. We Are Nebula!

Sometime later, Daichi and Xio ran another Synchronization Test for Cyber Gomora and to their surprise, the power output reached 100%, finally bringing Cyber Gomora into physical form. However shortly after materializing though, Cyber Gomora became unresponsive and refused to listen to Daichi's commands. It wasn't until during Ultraman X's battle against King Joe that Daichi learned from his Spark Doll of Gomora that Cyber Gomora wouldn't listen to him earlier because it was worried about Daichi's safety. Re-confronting the Cyber Monster, Daichi reassured Gomora that he will be okay, and that he needed its help for this battle. Listening this time, a Spark Doll of Cyber Gomora appeared before Daichi while he was inside Ultraman X. Activating the Spark Doll with the X Deviser, Cyber Gomora materialized into a physical form once more and the Cyber Monster helped Ultraman X in fighting back against King Joe. King Joe was no match for the combined might of Ultraman X and Cyber Gomora, and was ultimately destroyed by a combination of Cyber Gomora's Cyber Super Oscillation Wave, and Ultraman X's Galaxy Cannon. Afterwards, one last synchronization test for Cyber Gomora was conducted and it was officially cleared for usage by Xio. An Unknown Friend

Since then, Cyber Gomora was used by Xio on multiple occasions:

All of which Cyber Gomora was successful in stopping its adversaries.

Finally when Greeza appeared to attack Xio's HQ and consume more power, Cyber Gomora was summoned by Asuna to assist Ultraman X (Daichi revealed to her as being Ultraman X's secret identity) in battling against the Monster. Unlike his previous battles though, Cyber Gomora was no match for the unsettling and powerful Life-Form, and was soon defeated after Greeza struck it with his Greeza Beam attack fired from his back, causing Cyber Gomora to de-stabilize. A Beautiful End After Greeza regenerated from a failed self-sacrifice attack by Ultraman X to stop the monster, Cyber Gomora was summoned again by Hayato to battle Greeza once more. However there was little that the Cyber Monster could do on its own, and it was defeated once more by Greeza's Double Helix attack. It (along with several other Spark Dolls conficated by Xio) were then absorbed by Greeza to transform the life-form into his Ultimate Form.

Cyber Gomora was summoned to intercept the devil monster Zaigorg as it was headed for Carlos Tower, on the hunt for the green stone that imprisoned him. Targeting the monster while it was underground, Cyber Gomora managed to draw Zaigorg to the surface by firing at it with its Cyber Super Oscillation Wave. Cyber Gomora and the rest of Xio then attempted to finish off Zaigorg with the cyber monster's attacks and a barrage of cyber card-enhanced weapons. However, Zaigorg's incredibly thick hide allowed the devil monster to brush off their efforts, and Cyber Gomora de-stabilized after it was struck by two of Zaigorg's spines, which in turn, summoned the demonic Gorg Antlar and Gorg Fire Golza to assist their master in terrorizing Japan. 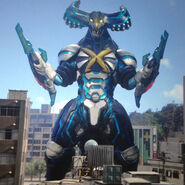 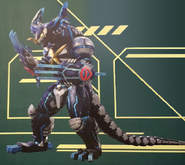 Retrieved from "https://ultraseries.fandom.com/wiki/Cyber_Gomora?oldid=18083"
Community content is available under CC-BY-SA unless otherwise noted.