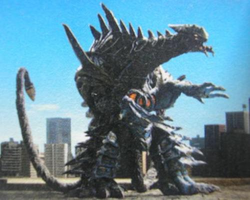 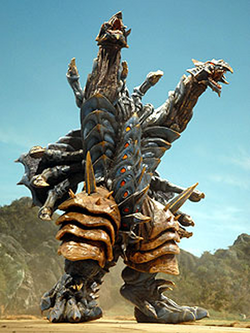 Dinozaur (ディノゾール, - Dinozōru) is an Alien Monster that first appeared in the TV series, Ultraman Mebius. He appeared in episodes 1, 4, 5, and 11.[1]

Dinozaur was the first Monster to appear on Earth in the last 25 years. Its presence was first detected by GUYS Spacy who tried to shoot it down with their L-77 Satellite. However, the Satellite's laser was quickly proven useless as the Monster easily destroyed the Satellite, thus it was up to GUYS to stop Dinozaur while it is still in Space. Despite hitting the Monster with all of their weapons though, it did nothing to deter Dinozaur's advancing to Earth, and their inexperience in dealing with Monster allowed Dinozaur to destroy all of GUYS's ships, leaving only Ryu (who had been ejected by Serizawa so as to lead GUYS in his place.) With nothing stopping the Monster, Dinozaur had now arrived on Earth, and proceeded to destroy everything in its wake. Despite Dinozaur's arrival though, his rampage was soon cut short by the arrival of Earth's newest Guardian: Ultraman Mebius! Dinozaur tried his best to attack Mebius with his Scoop Taser and his Missiles, but Mebius managed to evade all of the Monsters attacks, and after a relatively short battle, Mebius struck Dinozaur with his Mebium Ray, killing the Monster in one blow.

Later, another member of Dinozaur's race appeared in episode 5, (entitled "Reverse Shot") where it had been summoned by Bogal (in her human form) to attack the Earth again. However just before the Monster could arrive on Earth, it was blasted and killed immediately by a mysterious ray, fired by a blue figure known as "Tsurugi."

Retrieved from "https://ultraseries.fandom.com/wiki/Dinozaur?oldid=11028"
Community content is available under CC-BY-SA unless otherwise noted.