Gardi (ガーディー, - Gādī) is a "Monster of Light" that appeared in the TV series, Ultraman Tiga. He appeared in episodes 43 and 44, "Land Shark" (as a statue) and "The One Who Inherits the Shadows" respectively.

Long ago, Gardi served as the companion of a unnamed giant of light until both of them left their physical bodies behind and returned to their homeland, leaving behind large statues that used to be their vessel. In the present day, both the monster's and giant's statues were found in Kumamoto by Keigo Masaki, who had merged himself with the statue of the anonymous giant, bringing the statue to life and being dubbed Evil Tiga. Meanwhile, the statue of Gardi had found itself a host in the form of a nearby dog, who was injured when attempting to breach the energy field that Keigo had used to encase Daigo Madoka's Spark Lens. As the dog was about to perish, its life energy manifested itself as light and poured into Gardi's color timer, reanimating the statue.

Returning to the surface, Gardi confronted its friend and tearfully pleaded for him to stop his rampage, but Keigo had already been driven mad by his forced merger with the giant, and Evil Tiga struck back at the hero's former companion. Gardi fruitlessly continued to try and reach out to its friend while fending off some of Evil Tiga's attacks, but it was all in vain. Eventually, Ultraman Tiga would arrive on the surface after Daigo broke threw the energy field and reach his Spark Lens, but he was too late to save Gardi as Evil Tiga blasted him one time too many with his Evil Beam, killing Gardi in cold blood. After a brutal battle between the giants of light, Ultraman Tiga emerged victorious, and took Gardi's body to space to honor the last of his kind.

Later, a dog identical to Gardi's injured host runs past Daigo and the GUTS team, implying that the host was (at the very least) revived. 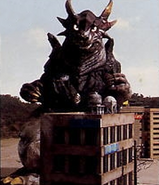 Retrieved from "https://ultraseries.fandom.com/wiki/Gardi?oldid=18192"
Community content is available under CC-BY-SA unless otherwise noted.