Lovrus was a monster who acted as one of Gimaira’s slaves. Unlike the rest of the Monster's slaves though, Lovrus was the more sympathetic example because in reality, he was actually the Chief of UGM, Ito! When Chief Ito was sent to Shiokaze Island to investigate Monster activity (as well as reunite with his fiancée, Sawako) he was drawn into Gimaira's fog and was struck by the monster's Mutation Ray, transforming him into Lovrus. When the other members of UGM were dispatched to find Chief Ito and resume his investigation for Monster activity on the Island, they too stumbled upon Lovrus and mistook it for an actual monster. As they fired upon it though, Lovrus managed to evade their attempts to kill him while Sawako tried her best to keep them out of their business by sabotaging their equipment as much as she could. To add to Lovrus and Sawako's misfortune, Ito's will and humanity was constantly in battle against Gimaira's hypnotic control over him.

Sometime later when UGM confronted Sawako for some answers, she revealed to them of Ito's transformation, but they (with the exception of Yamato) were too skeptical to believe her clams. Suddenly before they could get anymore answers out of her, the monster Daron (another one of Gimaira's Slaves) appeared from the Ocean and attempted to kill UGM. Yamato transformed into Ultraman 80 to battle against Daron, but the Ultra soon found himself in a tight situation when Gimaira managed to temporarily take control over Lovrus again, and the two monsters double teamed the Ultra, with 80 being unable to cause much harm to Lovrus. After a struggle in which Daron wrapped up the weakened 80 for Lovrus to attack him, 80 rolled out of the way, causing Lovrus to accidentally hit Daron instead. This provoked Daron into attacking Lovrus until 80 managed to kill Daron with his Ultra Ray Lance attack. 80 approached the hurting Lovrus to try and help him, but the monster was in too much pain and wandered away while 80 was forced to leave too as his energy was depleted.

Later once Gimaira had revealed himself and battled against Ultraman 80, Lovrus returned once it saw that 80 was at Gimaira's mercy and Lovrus tried to battle against the monster for mutating him. However, Lovrus was still too weak after his first fight and Gimaira beat Lovrus down and finally killed him by stabbing him with his horn and destroying his innards with energy. Lovrus then collapsed to the ground and reverted back into Ito. But as explained by Sawako, Ito had died, having been murdered by Gimaira's attack. Sawako, upset that she couldn't save her husband-to-be, decided to give Ito her own life. Using her alien nature, Sawako transferred her life force into Ito's body, reviving Ito but killing herself in the process. 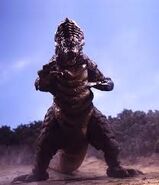 Retrieved from "https://ultraseries.fandom.com/wiki/Lovrus?oldid=18217"
Community content is available under CC-BY-SA unless otherwise noted.