Tyrant (タイラント, - Tairanto) is a monster that first appeared in the TV series, Ultraman Taro. He appeared in episode 40, "Go Through the Ultra Brothers!" Tyrant is considered to be the most popular Kaiju from his debut series, as well as one of the most recognizable monsters in the franchise as a whole. Subtitle: Tyrant Monster (暴君怪獣, - Bōkun Kaijū)

As stated in his first appearance, Tyrant was created by the souls of Monsters who were killed in the past by the Ultras who visited Earth previously. They grudge against the Ultras manifested into the Chimera Monster known as Tyrant, and the Chimera Monster was born on the planet Neptune. The souls that make up the monsters are as follows:

In some early magazines, one of Tyrant's horns was said to have been derived from Black King, although this has long since been written out of Tyrant's backstory.

In this series, Tyrant was the first Monster that belonged to a Reiblood Alien Keel named "Grande," who was on Planet Hammer. Tyrant was first used against Rei when Grande first encountered him, initially believing he would be fun to fight against. Rei summoned his Gomora and the two monsters did battle. Gomora tried his best, but Grande, having already had his Battle Nizer upgraded into a Neo Battle Nizer, proved his superiority over Rei and Gomora as Tyrant easily pummeled Gomora without showing any signs of difficulty. Realizing that Gomora was losing badly, Rei was forced to call him back and summoned Eleking to fight instead. Like Gomora though, nothing Eleking did could harm Tyrant due to the Chimera Monster's superior strength and after Grande decided it would be more fun to fight to the death, he ordered Tyrant to fight more seriously. Almost immediately, Tyrant's assaults on Eleking turned vicious, all while Rei was left to take hit-after-hit, unable to fight back. Even worse during their torture, Rei lost his Battle Nizer and was unable to retrieve it as Tyrant continued to pummel Eleking. Even with the ZAP SPACY arriving to try and weaken Tyrant by firing their missiles at it. Tyrant continued to show no signs of damage taken. Finally in one sick attack, Tyrant sliced Eleking's neck, and Rei's monster died from his injuries, leaving Rei comatose and Grande victorious, who took his leave by recalling Tyrant and taunting Rei for his inexperience. The Strongest Reionyx

In the following episode after Rei awoken from his coma, Grande was seen having summoned Tyrant once more to fight off a fleet of Alien Pedan ships who were looking for Rei (and Grande as well.) When Rei awoken and had his Battle Nizer upgraded into a Neo Battle Nizer, the two Reibloods did battle once more. This time though, Gomora was now on the same level of strength as Tyrant was, thus the two monsters' battle came to a Standstill. Finally during a beam battle between Tyrant's Flamethrower and Gomora's Super Oscillatory Ray, Gomora overpowered Tyrant's attack and the battle shifted to Gomora's favor from that point on. Gomora pummeled Tyrant to a pulp, and using the same tactic they used on Bemstar on Boris, Litra transformed into Fire Litra and discharged a huge burst of Fire from its body towards Tyrant. Tyrant absorbed the attack and left himself wide open for Gomora to stab Grande's Monster with his horn, charging Tyrant's innards with his Super Oscillatory Ray from the inside, destroying him. The Second Awakening

In this film, Tyrant was one of the many Monsters revived by Hyper Zetton with the use of Spheres (along with Antlar, King Pandon, Black King, and Velokron) to assist him in battling against the newly-formed Ultraman Saga. Fortunately the fusion ultra received some backup as well in the form of the Ultra Brothers (whom were earlier notified of the disturbance in Dyna's universe,) and they battled against Hyper Zetton's Monsters while Saga resumed his battle with Hyper Zetton. Ultraman Leo fought with Tyrant for a short period of time and eventually, Tyrant was killed after being struck by Ultraman Leo's Leo Kick.

In this mini-series, Tyrant served as the "newest" member of Kaiser Darkness's servents known as the "Darkness Five." After Jathar's failure in stopping Ultraman Zero, the Ultra was confronted by the next member of the Darkness Five, an Alien Temperor known as "Villanius." To assist him in battling Zero, Villanius revived Tyrant and together they formed a pairing known as the "Ominous Duo." While Zero found their name humorous, Villanius and Tyrant together formed a much more threatening pair than Jathar alone was, and both Monster and Alien proceeded to double-team Zero in battle. Worse still, just as Zero was managing to overcome their assaults, he learned from the Darkness Five's (then) Leader, an Armored Mefilas named "Sly" has taken a hostage in the form of Zero's friend, Pigmon! Taken advantage of the Distraction, the rest of the Darkness Five appeared (excluding Sly) assisted Villanius and Tyrant in overwhelming Zero with no mercy.

Fortunately for Zero, backup had arrived in the form of his own team: The Ultimate Force Zero! Arriving to ward off the Darkness Five while Ultraman Zero went off to face Sly and rescue Pigmon, each member of each faction faced off fiercely with one another, with Tyrant facing Jean-Nine specifically. Afterwards, Tyrant and the rest of the Darkness Five were left to watch from afar once Ultraman Zero returned as Zero Darkness to fight and kill the members of the Ultimate Force Zero members (after Zero had been possessed by Ultraman Belial's Ghost.) However, once Zero Darkness transformed into Shining Zero after Zero expelled Belial from his body, Tyrant and the rest of the Darkness Five were forced to retreat in fear of being attacked by Zero next. The Darkness Five was last seen together having regrouped with a revived Ultraman Belial, waiting for the next time to fight Zero again.

In this mini-series, Tyrant was revived by Reibatos when the Ghost Sorcerer combined the souls of the monsters that made up Tyrant's body in the Monster Graveyard. Tyrant was then unleashed to stall Zoffy and Ultraman Jack while Reibatos left to prepares the revival of Belial's former Monster Army. The two ultras were barely able to hold off Tyrant just long enough for backup to arrive in the form of Seven, Zero, and the newly transformed Ultraman Orb Emerium Slugger. Tyrant was no match for the combined might of 2 fresh ultras and a fusion ultra, and was eventually destroyed by a combination of Seven's Wide Shot, Zero's Wide Zero Shot, and Orb's Wide Slugger Shot.

Tyrant reappeared in the series, Ultraman Geed. He appeared in episode 9, entitled "The Sword of an Oath."[3]

In this series, Tyrant was one of the many Monster Capsules that was in the possession of the Alien Storm, Kei Fukuide. Learning of a recently appeared Little Star that was in the possession of Leito's daughter, Mayu, Kei unleashed Tyrant to find the girl and kill her so as to acquire said Little Star. Appearing directly above REM's Obsevatory, Tyrant was confronted by Riku, Laiha, and Leito, knowing that the monster was looking for Mayu. Riku immediately transformed into Ultraman Geed, and the ultra did battle with Tyrant to fend off the Monster. Meanwhile as the two battled one another, Laiha and Leito learned that another monster has appeared in Mitsuse Foothills: Skull Gomora! Leito transformed into Ultraman Zero to assist Geed and both ultras briefly tangled with Tyrant. However, believing that Kei might be with Skull Gomora, Geed left to confront the Fusion Beast while Zero was left to deal with Tyrant himself. Fortunately, the seasoned ultra managed to deal with Tyrant with no trouble after turning into his Zero Beyond form, and after slicing up the Monster with a pair of duel wielding Zero Twin Swords, Tyrant was immediately destroyed by the Wide Beyond Shot. 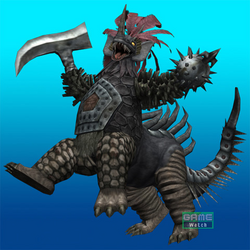 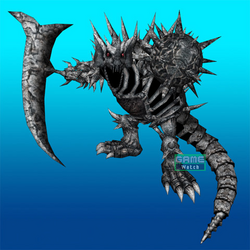 The 6 Ultra Brothers vs. The Monster Army

Retrieved from "https://ultraseries.fandom.com/wiki/Tyrant?oldid=17388"
Community content is available under CC-BY-SA unless otherwise noted.